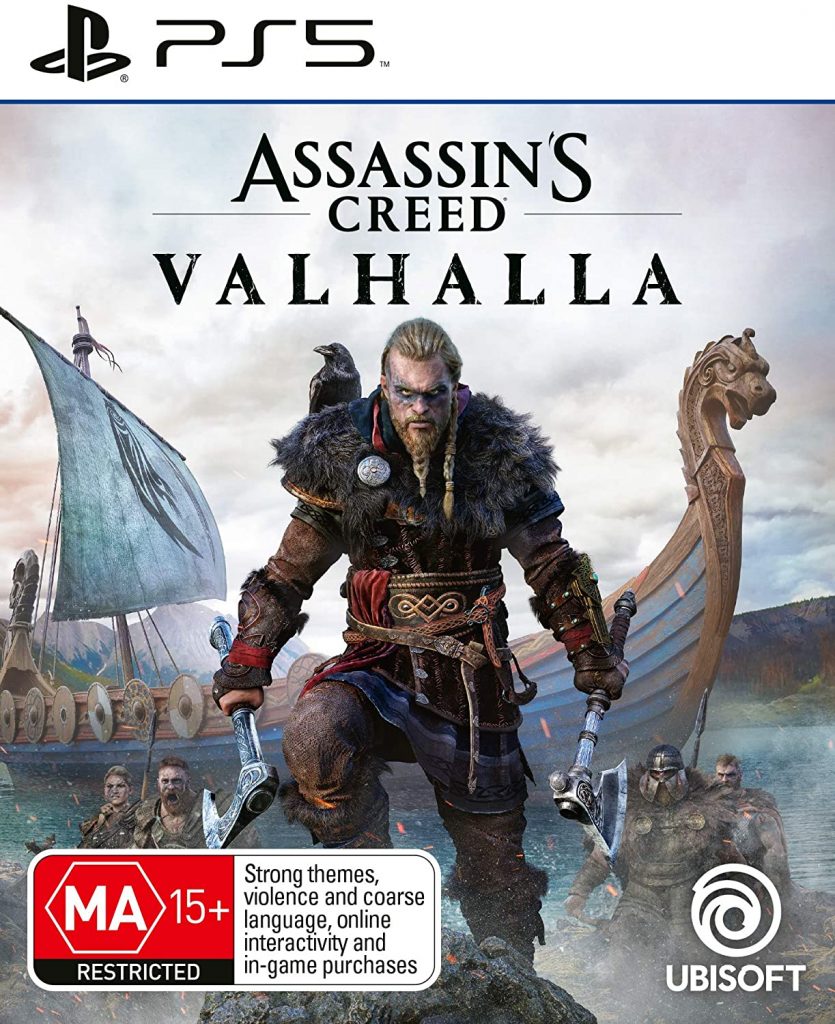 It’s very tempting to start any review of an Ubisoft game with ‘here we go again’ and while that may sound like a terrible slur, the Canadian game giant does rather ask for it.

Assassin’s Creed: Valhalla looks like it uses exactly the same engine as all the Assassin’s Creed games since maybe Unity, and at this point I have to say the engine is starting to look distinctly Last-Gen.

Granted, at the time of writing we’ve only been Current Gen with Xbox Series X/S and Playstation 5’s for about a week but in a video game universe that has included MGS:5 & The Witcher 3 for 5 years, God of War & RDR2 for over 2 years and this year The Last of Us Part 2 Resident Evil 2 Remake and Ghost of Tsushima, it is very much starting to look like the kid who turned up to school in no-brand sneakers.

But for all it’s sins (to say nothing of those of the production company) there is still a huge inherant gamyness to these titles. If nothing else you know that when you buy a modern Assassin’s Creed game that you will be getting a lot of play-hours for your money.

Massive bloated game length is a valid criticism if you’re a game journalist and you need to review 4 other games that week, but it is worth noting that your frame of reference might be very different if you can only afford one game to play for the next month or 6, or you only have a few hours a week to game and you game to escape into a world where you can be someone else or just zone out while you listen to a podcast or even to music.

Just before I got my copy of Assassin’s Creed Valhalla I heard the overwhelmingly positive throughts of Matt Gault on Waypoint Radio and I thought “yes, you know what why don’t I put my cynicism aside and just let myself enjoy this video game for the video game it is – forgetting the Ubisoft Troubles, the fact that it looks like a competant indie title now rather than anything the hugest game development houses in the world might proudly produce.

Fast travel is now a viable option – this is a function of PS5 and new gen rather than of the game of course but it makes a stark difference.

The Initially Not So Good:

The jank is back and it’s bad. The most immediately frustrating is the traversal which is strange given that it’s such a core part of the game play and has been for so long. I don’t recal it being this bad in either of the last couple of games but maybe the game worlds were somehow less cluttered?

I seem to be forever clashing into things I feel I should be able to hop over or round, and don’t get me started on trying to climb down.

It’s strange how we’ve kind of come to accept that even in one of the year’s biggest games from one of the world’s biggest game makers your character can’t jump off a horse without dramatically clipping through the back of it, or that idle villagers can just be standing around with their hands inside their torsos.

To England – and the 10th hour Title Card!

Ok we’ve finally left Norway after just over 10 hours of noodling around. The story feels like the strongest element so far given how creaky the game engine is and how oddly stilted a lot of the dialogue delivery is. It often feels like each line was recorded in complete isolation from both the previous and subsequent lines, but also from any other actors. This may of course be common practice but it seldom sounds so apparent.

But again we must stress that for all Assassin’s Creed Valhalla’s many kinks and janks and minor frustrations, its still the largely enjoyable game play experience that carries me forward.

It should be said that the crazy late title card which appears as you set off for England wasn’t a surprise – it had been widely reported so it was more of a relief when it finally popped up.

So far the characters seem to be better written than their often rather stilted line delivery – there is decent clarity & destinction between who I assume to be the main players so far and there’s decent variety in the minor cast too.

We’re Not In Norway Anymore…


Somehow although the shape of the game is the same – you run around (trying to) climb things and smiting fools – it suddenly feels quite different.

It might just be the strange “omni-season” where as you spin the camera around your stationary character, the game world behind them looks at various angles like it’s a chilly winter morning, a hot summer day, a warm autumnal afternoon and a cool spring evening. It’s actually more disorienting that you might imagine.

So the world has sprung to life in terms of colour and country side but also the story suddenly got a lot more varied and interesting. There are more divergent paths, more types of “mystery” quest scattered around the hills and dales, some quite remarkably obtuse and inscrutable.

We’re Not Even in England Anymore…


And suddenly we’re in Asgard.

Another striking change of scenery and the introduction of a heap of new characters – and wouldn’t you know it a heap more markers on the map. There were something like 30 “Ymir’s Tears” to collect scattered around the Islands that made up Asgard, some in really annoying or hard to reach locations. Being diligent I duly chased down each one in the expectation of grand rewards – it was time-consuming and fiddly – I had visions of huge XP boosts or unique items BUT NO – the reward for schlepping around was a couple of skill points.

And suddenly we’re in Juttenheim.

There were, of course, yet more “Ymir’s Tears” to collect here of a slightly different colour but I’d learned my lesson and completely ignored them. Oh, how it tore at my completionist urge but really for a measly 2 skill points I just couldn’t justify it.


I just helped a lady build a shrine to her cat but in the process of finding elements for the shrine I accidentally burned 3 or 4 of her kittens to death. Thankfully – because UbiWorld – the woman didn’t notice and I was adjudged to have completed the quest satisfactorily.

I think if you get towards the end of a game and find yourself thinking “oh god, please just end already” you’ve probably miscalculated a bit with your game design.

Sure, it’s going to be next to impossible to plot everything out so that it suits the game reviewer who has, by the nature of her engagement, to dash through to the end of a game as fast as possible, just as much as it might suits the kid who might save up and get this game to be “her game” for the next 6 months, who has the time and freedom to truly wallow and emerse themselves in every aspect the game’s every nook and cranny.

It’s a tricky balancing act and I don’t envy those who have to tread it.

Even though I was in a position to both languish a bit but also to languish quickly, I found that I was encountering characters in the game who’s arc I’d kind of lost touch with – the “I’m sorry who are you and why do I care again?” question is not one anyone should feel comfortable asking after putting 90+ hours into a video game.

Like the vast majority of Ubisoft’s seemingly endless and increasingly homogenous Open World adventures Assassin’s Creed Valhalla is easy to criticise – it’s very very long – not intrinsically a bad thing but I’m not entirely sure that this game meets the challenges that such a time-committment presents.

I can’t be sure – because it was so long ago – but I thought I had selected “let the game decide for me and swap around accordingly” when chosing which gender to play as. I started out as Femme Viking and only seemed to swap to Homme Viking for the Asgard and Juttenheim missions. I’ve no real complaints here it’s just that if you announce that as a game you’ll be gender-swapping willy-nilly and then find there’s much more Nilly than Willy that might disappoint some more than it did me.

I like when a game hides great gear behind protracted and obscure quests or procedures but the fact that the hammer Mjolnir(sp?) and the spear were basically inaccessible until right near the end of the game felt a bit like “well done – you’ve finally earned this amazing tool – sadly there’s no time to use it”. I understand it all about The Post Game and DLC but there isn’t a lot of post-game here and the DLC is still a ways off and frankly after 130 hours I’m not sure how much patience I’d have for DLC anyway.

Delaying the best gear has back-fired in the instance of this gamer.

Assassin’s Creed Valhalla is very very long – not intrinsically a bad thing as it does allow folks with limited gaming budgets an adventure to enjoy for huge tracts of time.

For the most part I never struggled with the “oh I’m under-levelled for that area” though there were a couple of key battles with individuals that I lost and noted to only revisit once I’d beefed up some more.

And for the most part I never really felt the plot dragged too much – gather all the counties and then take on the bad one worked fine as you pretty much always knew how much there might be still ahead of you. Waiting or killing time without knowing how long you have to do it is what really erodes one’s patience.

I also started to feel that the game looked better around when I finished than it had earlier on. Some of this could have been updates – or fatigue.

Raiding monasteries and storming castles – started out fun and stayed that way for the duration. Were they just so well spaced out that I never got tired of them? Perhaps. As a set-piece it did remind me a bit of Ghost of Tsushima but that’s hardly a damning comparison. For either game.

In terms of the actual story – the Ancient Ones plot line I think concluded just fine – there was a little twist and honestly it was nice not to face yet another boss fight.

There was a Yuletide thing up over the Xmas break. I put it off for ages and then was underwhelmed when I finally hopped back in. Did I miss something or was there nothing more than a couple of silly skill tests and a fist-fight tournament to win currency with which one could purchase underwhelming – if limited edition – gear?

I like free stuff as much as the next guy but this really felt super light.

Maybe it would have had more impact if I’d not yet finished the game?